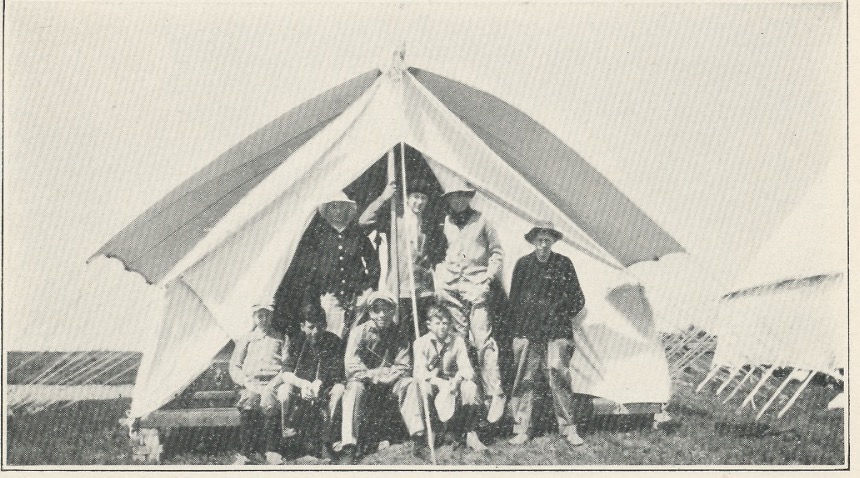 A short history before Camp Fuller was re-named

What we all know as Camp Fuller By-The-Sea actually had a short history as Camp Lawton.

Founded in 1887, Camp Lawton had several locations throughout Rhode Island including North Scituate and Hog Island off the shores of Bristol. It was re-located to its current location on Point Judith Pond in Wakefield in 1912 and re-named Camp Fuller in 1914.  The legacy and re-naming of the camp makes Fuller one of the oldest camps in the country. Our knowledge of Camp Lawton has been known, but the discovery of an old brochure printed in 1912 brings its history to light.

Started by the Providence YMCA, Camp Lawton served about fifty boys from the Providence area who traveled to camp by train.  From this photo, it appears as though they were dropped off at the Wakefield train station dressed for a fancy vacation, carrying their own bed rolls and a few essentials for camp.  We don’t know how they got from the train to camp, but given its remote location, their final journey may have been in a horse-drawn wagon or perhaps by boat.  Either way, they were in for adventure, good food, plenty of fresh air and rigorous days starting at 6:30 in the morning.

The boys were kept busy from early morning until 9:00 pm with taps being played to end the day.  Canvas tents with wood floors provided rustic shelter for campers and staff. Everyone went swimming in the salt water.  If you did not know how to swim when you arrived at camp, you were taught and knew how to swim before you went back to Providence.  Other activities included fishing, baseball, boating, camp fires and Bible study.  A spiritual component with regular Sunday Worship services were a foundation for the camp program and built on the principals of the YMCA.

Lester Clee was the camp director and each tent was made up of 7 boys and 1 counselor.  The cost to attend in 1912 was $ 5.00 per week with an additional round trip train fare of $ 1.40 to get from Providence to Wakefield if needed.  You could attend for any length of time from June 28th until August 9th.  Any boy of good character who had the consent of his parents could attend as long as the prospective camper agreed “to cooperate in every way to make the Camp a success.”  An application form had to be completed and mailed to the Providence address with a $ 2.00 registration fee which was then applied to the overall cost of attending camp.

The camp had a reputation for good food, thanks to the culinary skills of the returning Camp Cook, Mr. John Payne.  Those who oversaw the operations of camp guaranteed that there would be “an abundance of good, wholesome food, well-cooked by an experienced cook and served in good home style.”  What more could you ask for?

Sounds like camp to us.  But, let’s not forget that there was no electricity, hot or cold running water, telephones or cell service.  Much of the food was harvested from the camp garden and the proximity to salt water provided an abundance of fresh quahogs, fish and lobsters. Blueberries were abundant in the surrounding woods and provided more fresh food for the boys and staff.

So, when the history of Camp Fuller is written it must include Camp Lawton.  From its humble beginnings on leased land with an outhouse which provided a rustic camping experience for 50 boys to its current multi-faceted program serving hundreds of boys and girls from all over the world, Camp Fuller remembers its roots.  For those who built the camp, donated much needed funds over the years, attended as a camper and went on to work there, we thank you.