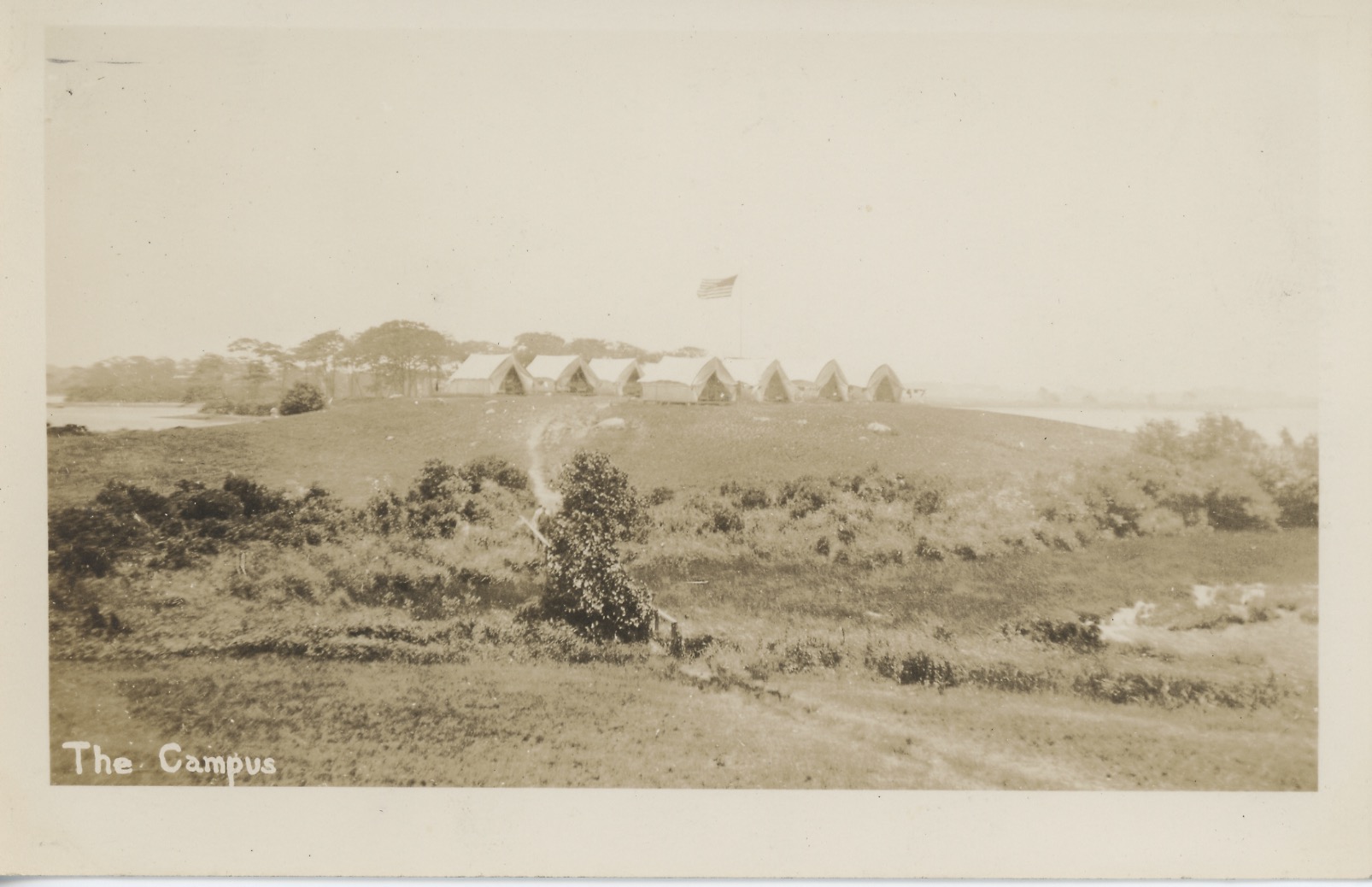 All institutions, regardless of age, have a history that is made up of facts, significant dates, people, and often times, stories that cannot always be validated.  Regardless, the history of Camp Fuller often resides in our memories which tend to change over time.  Our goal in writing the history of Camp Fuller is to be as accurate as possible based on old documents, photos, printed publications and folklore that has been passed along through the generations.   We also know that since Fuller started, anyone who came down that dirt road for the first time, whether on foot, in a Volkswagen bus or a new Tesla, their life would change in some way and their story would be worthy of re-telling.

Originally founded in 1887 as Camp Lawton, it wasn’t until 1912 that Camp Fuller re-located to its current location on Salt Pond in South Kingstown, Rhode Island.  The camp was named for Frederic H. Fuller, president of the Providence YMCA from 1895 to 1922.  In 1914, Mr. Fuller purchased and later donated the original land at Turner Point once owned by the Congdon family to the Providence YMCA to be used as a permanent home for the camp.  Original land records from the Town of South Kingstown reflect an original purchase price of one hundred dollars.  Similar town records show real estate taxes for this property at the time of purchase to be eleven dollars per year.  How times have changed...

From its humble beginnings as a small boy's summer camp, much has changed over the years.  Seven primitive tents were set up on what is now known as “Senior Hill” and the cost of attending Fuller was $ 5.00 a week.  Many meals were cooked outdoors and the boys often helped with meal prep and ate in a separate dining tent.  The waterfront area consisted of six boats and a slide on top of the wharf for added excitement and a bit of danger just for fun.

In 1920, camp purchased its first vehicle and a tennis court was added to broaden the scope of the program.  The dining hall was built in 1922 and by 1927, more land was acquired from the Congdon family to further expand the camp property.  The sailing program was started in 1928 with the purchase of camp’s first sail boat which was somehow named “Oswald”.   The additional land also allowed for the building of Junior Camp on Peckham’s Meadow which consisted of three new tents which brought the total to eleven tents.  As time want on, more kids were able to attend camp.

During the summer of 1931, in the height of the Great Depression, the first “Gypsy Trip” left camp for a 3-day adventure into the wilds of South County.  Early photos show a “good old horse” named Minnie pulling an old hay wagon loaded with smiling boys and a driver.  During this same summer, the original chapel was built along with the Junior Council Bowl which, we believe, is the current day Council Ring.

The 1938 hurricane brought massive destruction to the coast of southern New England, particularly the shore areas of Rhode Island.  Camp Fuller was mostly spared and made it through the storm with only a few bruises.  The following year of 1939, the YMCA purchased additional land from the Congdon family heirs, making the total footprint of Fuller about 28 acres.

World War II took its toll on the country, but Camp Fuller continued its good work providing a sound residential summer camp for hundreds of boys during this difficult time.  After the war and with the country back on its feet, the camp decided it was time to “modernize” and developed plans for a new Junior Division which would consist of five wooden cabins and a latrine with flush toilets and soap dishes!  In 1949, after much prodding from the board, Edwin F. Sherman allowed Camp Fuller to announce that he was a silent benefactor behind the new division and use his name to honor him by naming the new area Sherman Division.   A dedication ceremony honoring Mr. Sherman unveiled the entrance sign bearing his name. Those attending the ceremony were cautioned not to drive above the 15 miles per hour speed limit as they came down the camp road.

In 1952, the Rotary Club of Providence donated funds to Camp Fuller for the construction of a new ball field 400 feet long and 200 feet wide.  This project was done in memory of the club’s past president, Joseph E. Mahoney.  To this day, the ball field is still host to daily soccer and softball games along with many other athletic and large group events and was selected as the location for the climbing tower which has become a mainstay program at camp.

Camp Fuller continued to provide traditional programs at affordable tuitions which allowed many to attend.  Those who were unable to manage the tuition costs, were quietly brought to camp at little or no cost to their families, a tradition that still brings kids to Fuller today.

As the culture and landscape throughout the country changed, Fuller did as well.  The leadership of the camp embraced change and adjusted accordingly to keep the program vibrant and relevant. It was a different world and Camp Fuller became a part of it.

Not to be outdone by The Woodstock Music Festival held in the summer of 1969, Fuller answered back the following year with their own version and called it SUN PROD.  Complete with tie-dyed T-shirts, live music performed on the back of the old green truck and sleeping bags strewn across the hill beside the Dining Hall, campers and staff entertained themselves with an event that is still held each summer.   The music has changed, but the spirit of SUN PROD continues almost 50 years later… another testament to the long traditions at camp.

For over 90 years, Fuller was a boys only summer camp.  Breaking this tradition, camp was opened up to girls in 1978…and the face of Camp Fuller changed forever.  The initial resistance soon gave way to a new demographic which enabled camp to move ahead in a changing world. Girls are now a significant part of the mosaic at Fuller and make up over half of the enrollment each summer.

Camp Fuller celebrated its Centennial year in 1987 and did so with a float pulled through the streets of Wakefield and a huge commemorative event at camp.  One hundred years is no easy accomplishment for any institution and those who were at camp that summer can attest to the magnitude of the milestone.

To further accommodate an expanding program and more female campers, Jungle Division was built in 1990.  It included a new palace and allowed for a re-shuffling of other campers based on age grouping.

The original Dining Hall had not undergone any type of major upgrade since it was first constructed.  In 1999, this iconic building got a major face lift which included space for additional tables and seating, bathrooms and a beautiful outdoor deck which overlooked the sailing area.   The following year, 2000, the Point Judith Lodge was built to provide indoor housing for the younger boys in Junior Division.  The rustic tents were and continue to remain in use in other parts of camp.

Following trends in outdoor activities and a surge in interest in skateboarding, the Skateboard Park was built adjacent to Sherman Division.  It was an instant success and remains a very popular program area at Fuller.

After a brief hiatus with only smaller capital improvements being made, Camp Fuller embarked on a significant change to the waterfront area.  In 2016, the Turner Point Project was officially dedicated after a major fund-raising effort.  A beautiful new boathouse was constructed and upgrades to the sailing and swimming areas were made.  As always, the boathouse remains a central structure at camp and home to the Fuller Sailing Program.  Volunteers worked diligently to archive decades of Skipper Plaques which proudly adorn the walls of the new boathouse. A plaque displays all of the past Fuller Sailing Masters.

2019 saw other capital improvements as well.  Rustic landscaping was completed across the road from the Avie Avedesian Administration Building.  Flag Hill was moved down the hill and new signage along with a beautiful entrance gate were built which now display the new Fuller logo as a nod to days past. The historic Council Ring, always a significant gathering place for camp, received needed landscaping upgrades as well as new seating using locally sourced materials for the expansion.  The kitchen received much needed upgrades with new equipment and expanded areas for more efficient serving for a growing group of campers.

Just because everything is different doesn’t mean anything has changed.    - Irene Peter

For those who have not been back to Fuller for many years, plan a visit.  If you cannot visit, take some time and tour this website.   But, don’t be surprised to see how things have changed since you were there last.  Remember there was once no electricity or hot water.  The boats you learned how to sail in may not be there anymore and the historic Council Ring may look different.  The Sherman cabin where you spent your first night away from your family and cried yourself to sleep may look small to you now and the dilapidated old Boat House where you took your sailing test has been replaced by a modern, hurricane-proof building.  You will ask yourself: “What happened to my Camp Fuller?”  The answer lies not in the visuals and structures you remember as much as it lies in the memories you have from your days at camp.   Camp Fuller has always been in a state of change.  That is why the institution still thrives after all these years.  Embrace the changes, but hold onto your memories.

‘Til we meet again.