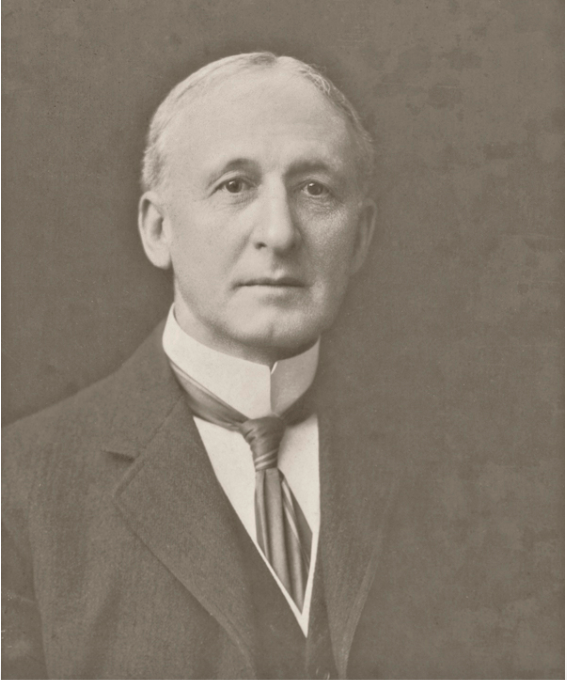 For many of us, the name Fuller is part of the camp landscape.  Few of us have ever wondered how this place actually got its name.  Perhaps this short story will shed some light on that unanswered question….

Frederic Henry Fuller was born in Providence, Rhode Island in May 1847. He entered the family business, known at the time as the Fuller Iron Works.  This well-respected foundry became a major contributor to the industrial wave taking place throughout New England. The company forged parts that were used to bring water to the city of Boston and made castings and other important components for commercial ventures in Rhode Island and the surrounding area. Frederic became vice-president of the company and was instrumental in its growth and success throughout the mid-1800’s.

Mr. Fuller eventually took over the Frederic Fuller Bell and Brass Foundry and carried on the traditions in the design and manufacturing of large bells which were installed in churches, schools, factories and fire stations throughout the region.  You can see from the Catalog of Bells (from 1860-1890) just how popular these bronze bells were.A Fuller bell in your steeple was a significant statement at the time. CLICK HERE TO SEE THE FULLER BELL CATALOG.

During his business tenure, Frederic H. Fuller became president of the Providence YMCA.  He served in this capacity from 1889-1895 and then again from 1903–1922.  He was known for his commitment to his community and his passion for helping others.

In 1914, Frederic Fuller purchased the original 15 acres at Turner Point on Point Judith Pond from the Congdon family. He then donated that property to the Providence YMCA to be used as a permanent home for the boy’s summer camp which had been previously renting the property from the Congdons.  According to the documented land transaction which is recorded at the South Kingstown Town Hall, the purchase price for the land was one hundred dollars.  The year after the land was purchased the real estate taxes on the property were eleven dollars.

For this generous act, the Providence YMCA named the camp after him.  The original land became the cornerstone of what we all know as Camp Fuller today.  From its humble beginnings as a boy’s summer camp to its current-day campus serving boys and girls from all over the world, Frederic Henry Fuller’s vision still stands after more than 130 years.

In commemoration for Frederic Henry Fuller’s generosity and dedication to Camp Fuller, an original Fuller bell was located, purchased and painstakingly moved from an old church in Massachusetts and re-located to its present location at camp near the road to Sherman Division.  A gazebo was designed and erected to showcase this beautiful bronze bell and serve as a lasting testament to this great man and friend of Camp Fuller.  Special occasions at camp are announced by the ringing of the Fuller bell.

Our thanks to the Rhode Island Historical Society for allowing us to use the Fuller Bell Catalog for this article.