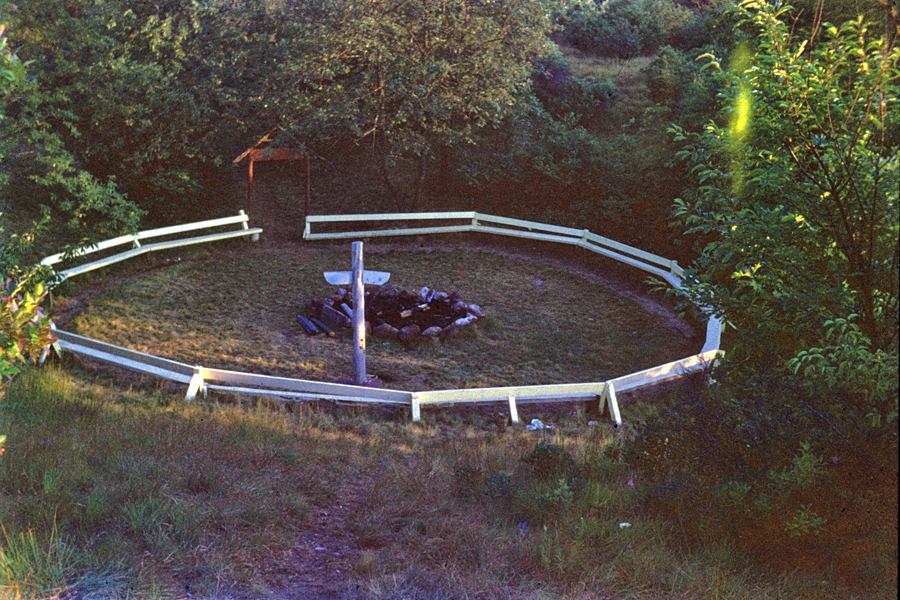 Although the Camp Fuller Council Ring may be unique to our camp landscape and culture, the design and use of council rings can be traced to ancient Viking and Native American villages where they were used for public gatherings.  The circular design which has a small opening at one end, invites people to come together and sit as equals.  Everyone can see each other and look into the eyes of their neighbor.  This seating arrangement allowed for group participation with nobody actually seated at the head of the table.

One of the most prominent landmarks of the Camp Fuller footprint is the Council Ring.  We do not know exactly when this structure was actually built, but early writings referred to that great outdoor space as “The Junior Council Bowl”.    We imagine that the natural amphitheater just below the director’s cottage has been there since the very early days of camp.

Over the years, the Council Ring has maintained its basic shape, taking advantage of the natural slope of the land surrounding the fire pit in the middle.  Rustic wooden seats lined the perimeter of the space so that everyone could focus on the fire and whomever was speaking or providing entertainment at the moment.  Over the years, as camp expanded, more seating was added up the hill which allowed the young Shermans to move off the grass and onto the wood benches.

Central to the Council Ring was a Totem Pole which was carved and erected in honor of the Native American culture which was a big part of Camp Fuller.  We do not know the date when the first Totem Pole appeared in the Council Ring, but we do know of a replacement that was secretly constructed at night by Larry Schwartz and Haig Avedesian.  Working in the shadows of the maintenance shed when everyone else was sleeping, the Totem Pole was kept under wraps, transported in an old green Plymouth and erected while the entire camp was asleep.  A canvas tarp was draped over it and removed in front of the entire camp at the beginning of the next council fire.  Larry still remembers the look on everyone’s face when they pulled the veil off.   A well-kept secret turned into a stunning surprise for all to admire and became a part of the sacred space of the Council Ring.

Today’s Council Ring has been recently upgraded with native granite seating and a smaller fire pit.  The improved structure still maintains its rustic look and feel and offers a nod to yesteryear.  During the 2019 renovations, the landscape designer and contractor were very respectful of the space and went out of their way to not disturb the ancient ashes which have been left undisturbed in the fire pit for generations.  A matching granite stage was constructed to accommodate larger groups and remains in keeping with the historic feel of the space.

With all of the changes and upgrades made to the Council Ring over the years, the ashes in the historic fire pit in the middle of the ring has not been disturbed.  Those ashes have become part of the history of Camp Fuller.  With each passing year and the solemn ceremonies that take place in this space, you cannot help but feel the warmth of the past as you toss YOUR chip into the fire and reflect on your time at Fuller.  At that moment, you become part of Fuller history.

Another major improvement to move ahead while respecting the past…