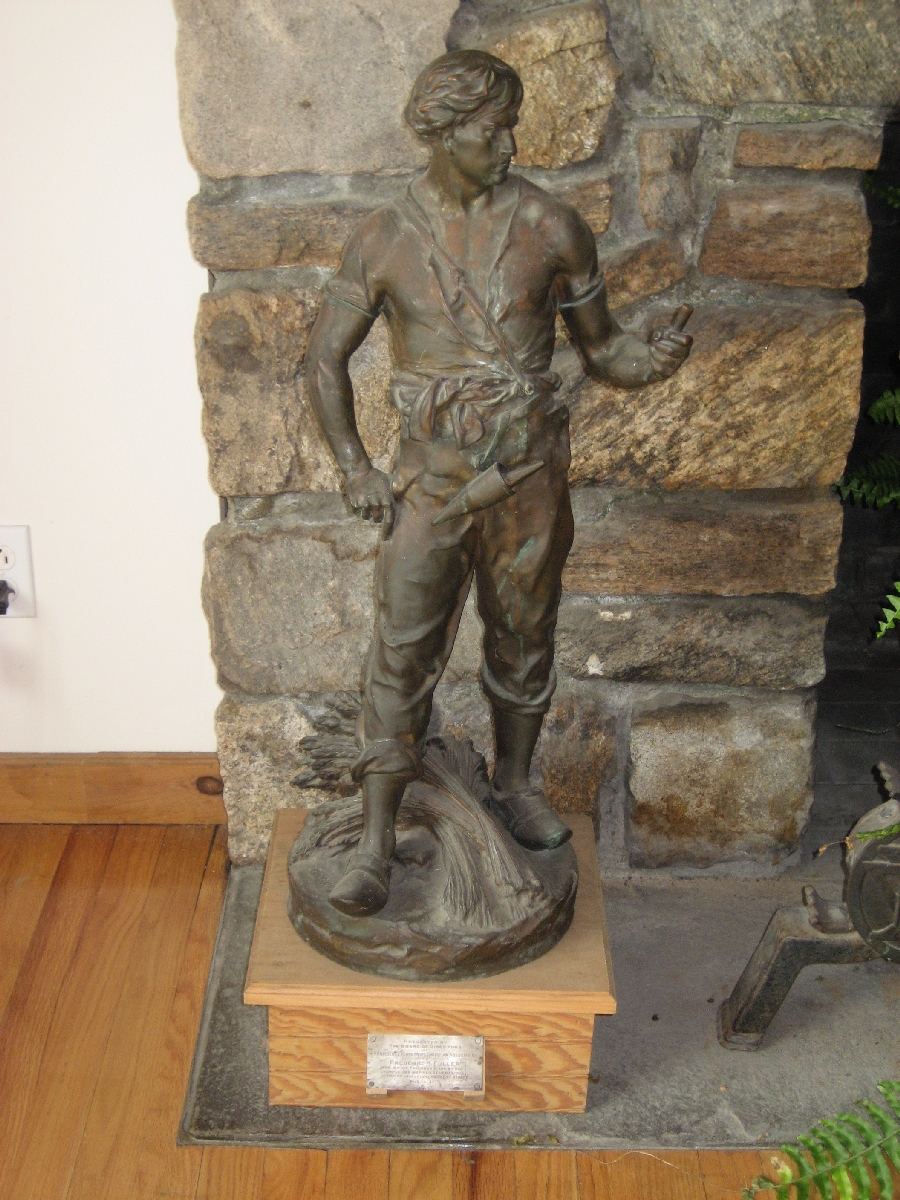 Most of us have walked by this over the years, but few know the story behind the Fuller statue.

Sitting quietly on the fireplace hearth of the Ad Building is a bronze statue of a man holding what appears to be a tool of some sort (possibly a scythe).  Between his feet is a bundle of wheat, suggesting that the man was a farmer or laborer.  The statue stands about thirty inches tall on a wood base.  Attached to the base is an engraved plaque, which, in part reads “Presented by the Board of Directors of the Providence Young Men’s Christian Association to Frederic H. Fuller”.  The date inscribed at the bottom of the plaque is 1917.

Wanting to know more about this sculpture, we were fortunate to find a very well-known art appraiser in Rhode Island named Michael Rose.  Mr. Rose is a member of the Art League of Rhode Island and the founder and owner of Michael Rose Fine Art.  He was generous with his time and expertise and provided us with pro bono background information on this work of art.

Based on the signature “E. Picault” at the base of the sculpture, Mr. Rose was able to confirm that Picault was the artist who created the work.  Emile Louis Picault (1833-1915) was a prolific French sculptor who trained under Louis Royer.  His work would be considered neoclassical and his subjects were “often historical and mythological or contemporary and patriotic”. Many of his sculptures demand high prices in today’s art world.

The sculpture is from a series of works Picault created featuring romanticized laborers, which was a common theme during his period.  Mr. Rose suggested that the sculpture may have been installed outdoors for some time which was determined from the amount of tarnish and wear that is noticeable on the exterior of the piece.

Although Mr. Rose determined that the artist is, in fact, Emile Louis Picault, we do not know where the piece was actually made. We are unable to confirm the foundry but, further research suggests that the Gorham Manufacturing Company in Providence may have cast this bronze statue.   Gorham was world-famous for its silver and they were also known to have manufactured bronze sculptures like this one.

This may be another “Fuller Mystery” that we can only speculate on.  Either way, the sentiment behind the statue was a testament to Frederic H. Fuller’s generosity and commitment to his namesake, Camp Fuller.  This one-hundred-year-old fixture is another reminder to us all of the deep history of camp and those individuals who made it all possible.