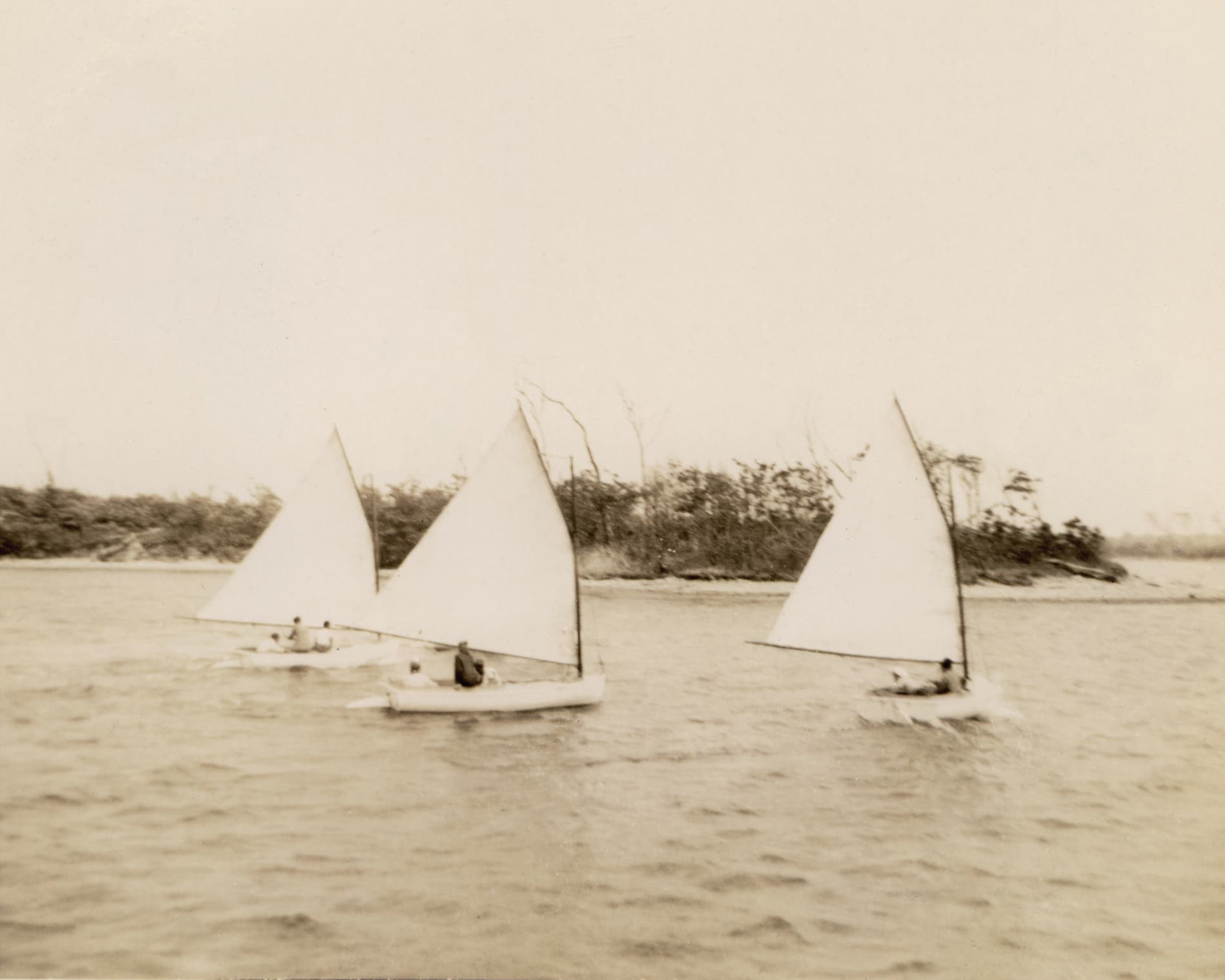 History of the Sailing Program

Although many other programs make up the list of camp activities during the summer, few are more popular than the sailing program. The first sailboat, named "Oswald" arrived at Fuller in 1928. A second, named "Goblin" followed in 1929, and a third, "The Blue Streak" came along in 1932.

Despite the impacts of the Great Depression, Camp Fuller continued to find the resources to put kids in boats and out on the water. Three sailboats, six rowboats, a war canoe and a power boat named "Bobby C" made for a diverse waterfront and allowed more campers to have fun and learn on Pt. Judith Pond.

Early writings show that sailing became a mainstay in the regular summer program. Ideally situated on a beautiful body of salt water, just minutes from the big waters of the Atlantic Ocean with dependable winds to move boats, the fit was a good one. Light, early morning breezes became ideal for the less experienced. By the time the noon-day meals were finished, the wind would usually kick up and beckon those with higher skill levels to the sailing area at Turner Point to match their wits and skills for racing and more advanced levels of instruction.

Beginner and Intermediate level sailors received land instruction, boat handling, and basic sailing theory while given the opportunities to take the helm under the watchful eyes of seasoned sailing instructors and more advanced sailors.

Skippers became an elite group and campers would often work all summer toward their esteemed Skipper Plaques, which were proudly crafted and, upon completion, displayed on the walls of the Boat House.  Stories have been told and re-told about the challenges and difficulties of earning the rank of a Fuller Skipper.

While the campers gradually worked their way up the ladder of the Fuller Sailing Program, the staff instructors came under the watchful eyes of the Sailing Master.  Often seen as the pinnacle of staff advancement and a respected member of the Top Staff at camp, the Sailing Master was responsible for the overall running, safety, maintenance and educational program. Over the years, many have held this respected position at camp.  Each Sailing Master has brought his or her own skill set to the job and has made changes and improvements to the program with each passing summer.

The sailing program has grown to become an integral part of the overall summer program. Most campers still sign up for sailing instruction and the expanded fleet of boats makes access to the wind and water available to any qualified camper who ventures down to the Sailing Dock.

The fleet has changed over the years and has grown to accommodate the number of kids who want to learn how to sail, be safe on the water and, in some cases, be a competitive sailor and race both in and out of camp.  The 1940’s brought a small fleet of Beetle Cats to Fuller.  A stable, gaff-rigged wood boat was perfect for teaching and taking a group out for a lesson or a leisurely sail on the pond.  Puffins were added to the fleet and eventually replaced the tired and leaking Beetles.  These fiberglass fourteen footers had plenty of room and the jib made for a more challenging sail with more hands needed.  Widgeons, Galilee 15s, Javelins and a few other designs made their way into the sailing program and were sailed for many years. Great for group instruction, they became a recognizable Fuller boat to regulars on the pond. Most were sea-worthy vessels and were occasionally sailed out of the Harbor of Refuge and into the ocean by camp’s best sailors.

As racing took hold and more campers wanted to participate in competitive sailing, 420s and Lasers were brought to camp as well.  The sailing area was never without a wide range of boats, all introduced to Fuller to meet the instructional and recreational needs of a growing camp population.

We will bring more photos, stories and information about the Fuller Sailing Program in the future.  Feel free to share your stuff with us.  There’s a lot of room left on board…