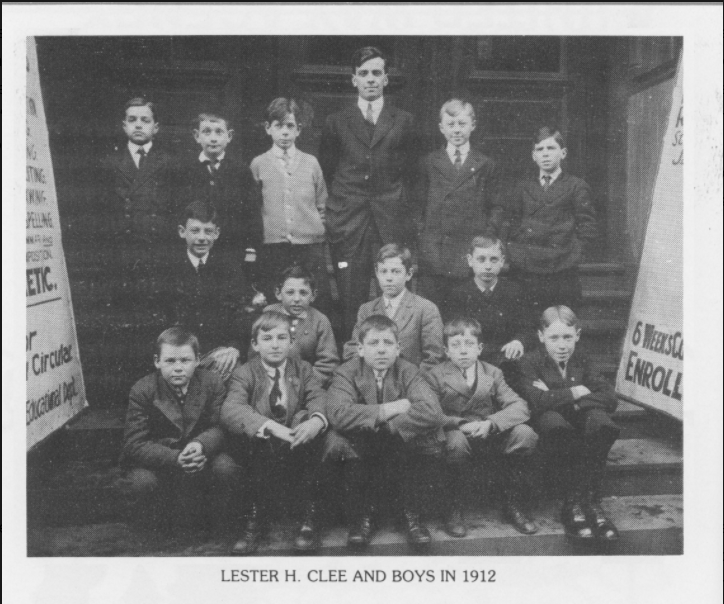 Lester H. Clee was Camp Fuller’s first director serving from 1912-1915.  We are guessing that he was probably the first person to welcome the brand-new group of boys who ventured down the camp road shortly after Camp Lawton was re-named and Fuller had a new home on Point Judith Pond. The picture above may have been taken on the steps of the Providence YMCA with the first group of boys who would attend Camp Fuller.

Lester Harrison Clee was born in 1888 in Thompsonville, Connecticut.  When he was a young boy, his father became ill and Lester was forced to move to Worcester, Massachusetts and take a job in a local steel mill.  While he was working in the mill, he started a boy’s club for his fellow mill workers and in 1908 began working for the Young Men’s Christian Association in Quincy.

His energy and enthusiasm helped him overcome many obstacles in this work and he became the chairman of the Boys’ Religious Work Committee.  During his first year at this job, he was named Secretary of the State Conference; a high honor for a very young man.  Lester stayed in Quincy until 1911 when he moved to the Providence YMCA and became the Boys’ Work Secretary.  During that same time, he married Katherine Steele and realized shortly thereafter that he had a calling for youth work and the Christian values of the YMCA.

Lester Clee nurtured Camp Fuller for its first three years.  We can only imagine how challenging and rewarding that time must have been.  No electricity, a limited budget, and a world war raging on the other side of the ocean made the job even more difficult.  His positive attitude and strong values undoubtedly got him and his small staff through some difficult times and laid the foundation for the growth and expansion of Camp Fuller.

After leaving Fuller, Lester Clee became a minister and worked in New York City and Bergen County, New Jersey between 1918 – 1926.   He later served as pastor of the Second Presbyterian Church in Newark, New Jersey for twenty-five years and retired in 1950.

Lester also had a life in politics and was elected to the New Jersey General Assembly in 1934. Three years later he became the Republican nominee for Governor of New Jersey and was very close to winning that election.  His life in public service continued as he served in various top positions in New Jersey State Government.  He became active in Bloomfield College and Seminary and served as a trustee and acting president of the college from 1959-1960.  A dormitory, Clee Hall was built in his honor.

Dr. Lester Clee died in 1962 in Princeton, New Jersey at the age of 73 after a long and productive life.  His early days on Point Judith Pond probably had a lot to do with his careers in the ministry, public service and education.  And to think it had early roots at Camp Fuller.

We thank Lester H. Clee for his leadership, vision and dedication during the first years of Fuller. He would be proud to return and see the fruits of his labor.