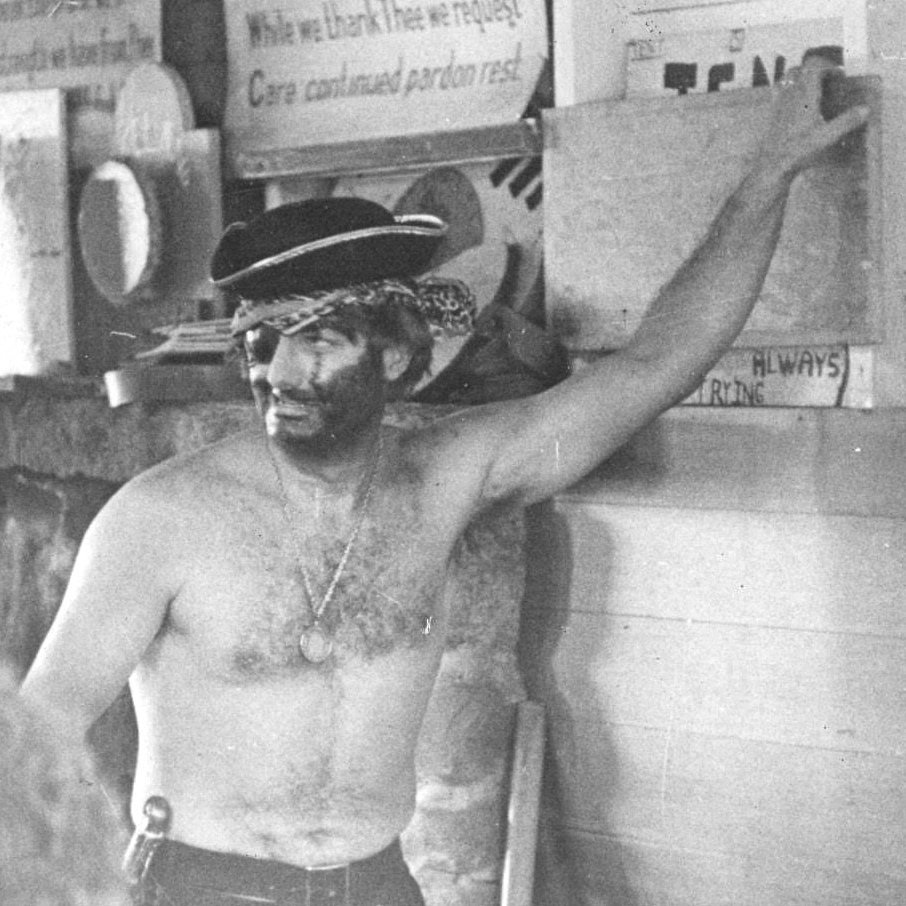 In the Summer of 1963, I was eight years old and I went to Camp Fuller for the first time. At that time Camp had four two-week sessions. I went to the second session that began before the 4th of July. I was a Sherman Division Camper in Cabin 3.

My next-door neighbor Steven Himmelfarb was my CIT. At lunch on Sunday at the beginning of my second week, the kitchen door (a Dutch door) flew open and this scruffy Pirate roared out into the mess hall. At eight years old, this was a bit scary. Avie stood up and signaled for everyone to sit down and be quiet. Peg-leg Pete (Joe Frisella) hobbled on one leg down one aisle of the mess hall in silence, and at the back of the mess hall he pulled a knife from his belt and stabbed a list on the wall. He moved up the other aisle often leaning on others for stability and swiftly exited the mess hall back through the Dutch door.

It’s worth noting that few years later Peg-leg Pete leaned on Larry Lavine, a Sherman counselor. Larry was a large guy and very funny. And when Peg-leg leaned on him and growled, Larry growled back, the mess hall roared with delight!.

When Peg-leg Pete had gone, the place erupted! Avie marched down the aisle and pulled the knife from the wall. He instructed us as follows. Campers, when I read your name from this list stand up on your stool. You are Pirates!

He read the names of the Pirate staff too and the Pirate Leaders led the Pirates out of the mess hall. The rest of us, we found out, were the Defenders. There were always more Defenders than Pirates. It was an honor to be a Pirate.

Avie also read the “rules” of Pirates Day. I do not have a copy and I do not know all the rules. I do know that new rules had to be added each year because one side or the other did something new to try and win the game that was then deemed unfair and had to be outlawed the following year.

For example, entering buildings to get on to the roof to see Pirate movements, using vehicles to transport Pirates (John Hirsch and his Pirates rode in the Nurse’s husband’s van on its way to the infirmary and jumped out right next to the baseball field one year), using walkie-talkies to relay strategic information, and staff interference. I suppose drones would be outlawed today! It was a fluid game from year to year.  But in general the game is straight forward.

All campers must wear, at the center rear of their shorts, an 18 inch by 3-inch canvas tag (approximately 9 inches in and nine inches out). The tag cannot be tied. If your tag gets pulled you are dead and must go to the jail, the game is over for you. The best way to pull a tag is to gang tackle, making it a rugged game. Camp staff are advisors and do not “play” in the game.

The council fire that night often included separate skits by Pirates and Defenders. Before lunch the next day, Pirates Day, the Pirates would dress like Pirates and camouflage their bodies with charcoal, then storm out of the mess hall after lunch, board boats and canoes and go to Gardiner Island (440) across from the swimming and skiing areas.

When the bell rings and the game begins the Leaders race to solve the clues to identify and then secure the treasure. The Defenders have the advantage in finding the treasure because it is on land. One year the Pirates almost found the treasure before the Defenders! That would have made it very difficult to defend, so some urgency is involved.

When the Defenders find the treasure, they must immediately bring it to the baseball field (one year they tried to stall). The baseball field is chalked-off in the shape of a large rectangle. The size varied from year to year!

At eight years old, I do not understand the rules, I do not know what is really going on at all. As a Sherman Division Defender I find myself, coincidentally, in front of my cabin (3) along what is the third base line extended to the outfield (chalked). It is hot, I am thirsty and getting bored.

There is another Sherman Division camper a few feet away. The chalked-off area is huge on this day or is it that I am so small! Either way, it is a pretty porous defense! I guess the Pirates entered the chalked-off area, I was oblivious.

There was some hub-bub and the next thing I knew a Senior Division camper, Spike Birmingham (he had a brother Tack) whisked right by me with the treasure on his way pass Sherman Division to the path to Boating and Canoeing (B+C) and Salt Pond. I must have taken note subconsciously of how quickly this had happened. The game was over.

At the swimming area Avie held the boom sideways then pushed it in the air, broom-side up. The Pirates had won, in easy fashion. Staff on the loosing team had to walk the plank (diving board) and the winning  team staff jousted them off in to Salt Pond. Then there was a free swim.

My fourth year at camp I was in Junior Division Tent 1, and finally, I was a Pirate! The Pirates had not won the two previous years and the Pirate team was stacked. So much so that the Pirate Leader, I believe Steve Leslie, implemented a strategy that consisted of landing all the Pirates on the Ski Beach (except for one small group of Junior Pirates) and running them on mass from there to Senior Hill and down the road through the soccer field and up to the baseball field.

Although the Pirates were camouflaged the Defender Leaders figured out the strategy. They then hid their best athletes along the road between the soccer field and the baseball field. The Pirates were winded after the long run and several of the best Pirate athletes were targeted. It was a massacre!  The dead Pirates went to the jail located next to the Cook’s house. It was early in the game.

I was with the group of Junior Pirates hidden in the PIG (usually used to ferry sailors to boats on moorings) and taken to the back end of Hum Drum Cove, past Indian Rock. We ran through a trail cut the night before that ended at the back of the Day Camp Lodge. From there it was a sprint to the middle of the baseball field. We were in! It sure was great to be a Pirate and to get to the middle of the baseball field.

Our excitement did not last long. We looked over to see our entire team dead in the jail. Totally bummed out. We eventually made a break with the treasure (I did not carry it) back toward the Day Camp Lodge. We were all caught in the woods before we could reach Hum Drum Cove and Salt Pond.

The Pirates would lose the next two years, a total of five years in-a row. After the Pirates win in my first year the chalked-off area kept reducing in size making the Defenders job easier. It wasn’t as much fun being a Defender, in part, because the Defenders didn’t get to dress up.

To alleviate this discrepancy one year the Defenders dressed up as Greasers. The staff and kids loved it. At lunch on Pirates Day the Defenders brought 55 gallon drums to the front mess hall porch and started pounding on them, chanting “grease it, grab it, defend it, bend it” over any over to the beat of the drums. Maybe the only time the Defenders psyched out the Pirates. It was usually the other way around. I believe the Defenders won that year.

I was never a Pirate again as a camper, even in my last year in Senior Division. That year I was stationed near the trampolines in front of Avie’s house. I was tackled by someone as Keven Devoe whisked right past me on his way to Turner Cove and Salt Pond for the Pirate win, a pretty long run at that! I watched it from behind. At this point, I’ve been run over twice by the winners in the only Pirate wins in seven years!

The next year in 1970 I was the B+C CIT on Senior Hill. John Bolster was the counselor. Staff could not play in the game but they were involved in strategy. And I had been thinking about this for some time. I was a Pirate.

Bill Ressler and Tom Elmendorf were the Pirate Leaders. I proclaimed in the mess hall that Pirates Day would be over in 15 minutes. I was serious! Everyone else assumed it was just rabble rousing.

Louie Mariorenzi was the Skiing CIT on Senior Hill and he too was a Pirate. We developed a strategy that combined several aspects of my previous Pirates Day experiences. We would use the PIG, hide a select group of Senior and Junior Pirates, travel to Hum Drum Cove, and enter the baseball field from the Day Camp Lodge.

Once in, the Pirates would only make a quick stop to grab the treasure and run towards Sherman Division down the path to B+C and Salt Pond. We mimicked Lee Marvin’s speech in the movie the Dirty Dozen as a motivational tool. No one had to think, just execute the plan. Something like:

5. Find Louie at the trail head

6. Stop at the Day Camp Lodge

7. Sprint to second base

We had the Pirate campers reciting it with a cadence (as in the movie). Tom Elmendorf was driving the PIG that day as Pirate Leader. When I pushed him and the PIG back in to Hum Drum cove I told him I would see him at B+C in 15 minutes. He laughed!

The tide was high, the plan went off without a hitch. We had Steve Davidson and Steve Lefkowitz as the runners, Andy Wilkes and John Warren were there too, I believe as Juniors. No one was catching that group.

When they got to the baseball field there was almost no one there. To make sure we would not get accused of interference Louie and me did not enter the baseball field with the Pirate Campers. They were on their own. No problem. We saw them burst out as we ran to the soccer field and on to B+C from the volleyball court, again to prevent interference.

When Louie and me arrived at B + C our kids were in the water and Tom was just pulling up in the PIG. What a celebration! Avie showed up and was none too happy. Then the skies opened up and it poured in sheets, game over. The Pirates had won in 15 minutes!

It would not be fair to end the story here. In 1975 I was DLB (Division Leader Boss) of Junior Division. I was the Pirate Leader with my lifelong friend Steven Filler. We employed the same strategy and took a group of Pirates to Hum Drum Cove. It did not go well, Stephen Barlow easily guessed where I would attack and was waiting there with many Defenders, and the tide was low. We lost, but I was ok with it, I had made my peace with Pirates Day many years before. But Pirates Day was still an event we looked forward to every year!