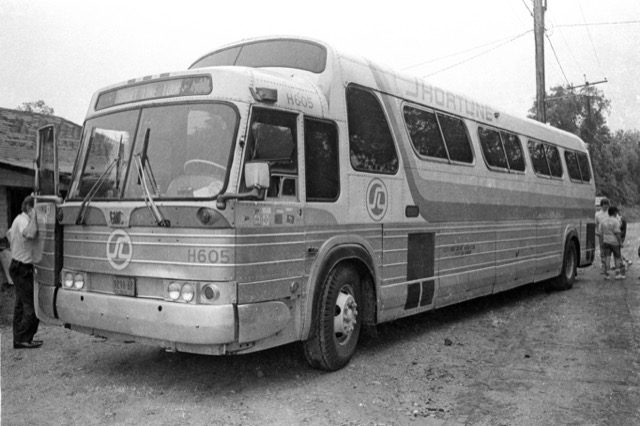 The invasion from Spring Valley by Myra Scher

If you went to Camp Fuller in the mid-1970’s then you certainly remember that there was an unusually large number of campers from Spring Valley, New York.  You probably also remember that for several years there was a Spring Valley bus that took that group to and from camp.  My name is Myra Scher, and my sons Steven and Bobby attended Camp Fuller from 1968-1976 (Steven) and 1969-1976 (Bobby).  I can shed some light on the reason there were so many campers from Spring Valley (and Rockland County, NY), as well as how the Spring Valley bus came to be; after all, the bus was my idea!

Although we were from Spring Valley, from 1967-69 our family lived in North Kingstown, Rhode Island.  The boys’ father had been drafted into the Navy, and was stationed at Quonset Point.  I learned later that Josh Worby, who is also from Spring Valley, attended Fuller prior to my boys, but I heard about the Camp while living in Rhode Island, and sent Steven during the Summer of 1968.  Incidentally, and I know it is not relevant to the story, Steven won the award for Outstanding Sherman that year (a Jewish mother never misses an opportunity to kvel).  Steven enjoyed it so much that the following summer I also sent Bobby; though he was only eight at the time, and the minimum age was nine, the Camp allowed him to attend since his older brother would be there.  It was only a fifteen mile drive from our house to Camp, so driving to and from Camp and attending Visiting Day, was a breeze.

After we returned to New York in the fall of 1969, I intended to send the kids to one of the more upscale camps in the Adirondacks, which isn’t saying much, since most camps might be considered upscale compared to Fuller.  The boys wouldn’t hear of it.  They declared they were going back to Camp Fuller – End of Story!  And over the years many of their friends (Eliot Greenspan, Josh and Michael Mandel; Shawn and Scott Lowe, and Steven Adler to name a few), and many of my friends’ kids (the Geller boys, the Frey boys, the Cantor boys) went as well.  Through word of mouth, more and more kids from Spring Valley and Rockland County started to attend Camp Fuller.

Of course the trip from Spring Valley to Camp was at least three hours.  And the kids were now attending multiple sessions, so in addition to the drives to and from Camp, there were visiting days as well.  And there were many other families making the same treks.  So I decided to take matters into my own hands.  If I could arrange for a bus and get enough families to participate so that it made sense economically, would the Camp cooperate?   I think I got Avie Avedesian on the phone, and he was enthusiastically supportive.  Not only did the Camp provide contact information for all of the families attending Camp from Rockland County, for several years Avie’s son David came down to NY the night before so he could be the chaperone on the bus back up to Rhode Island the next day.  The response was overwhelming and we sent a packed bus of campers every year for a number of years, and later even organized a bus for the trip home at the end of the summer.  The kids loved the bus ride, and looked forward to it every year.  I never told them that the parents loved it even more.

As you know, Camp Fuller has so many wonderful traditions; I am so glad that I played a small part in one of those traditions!