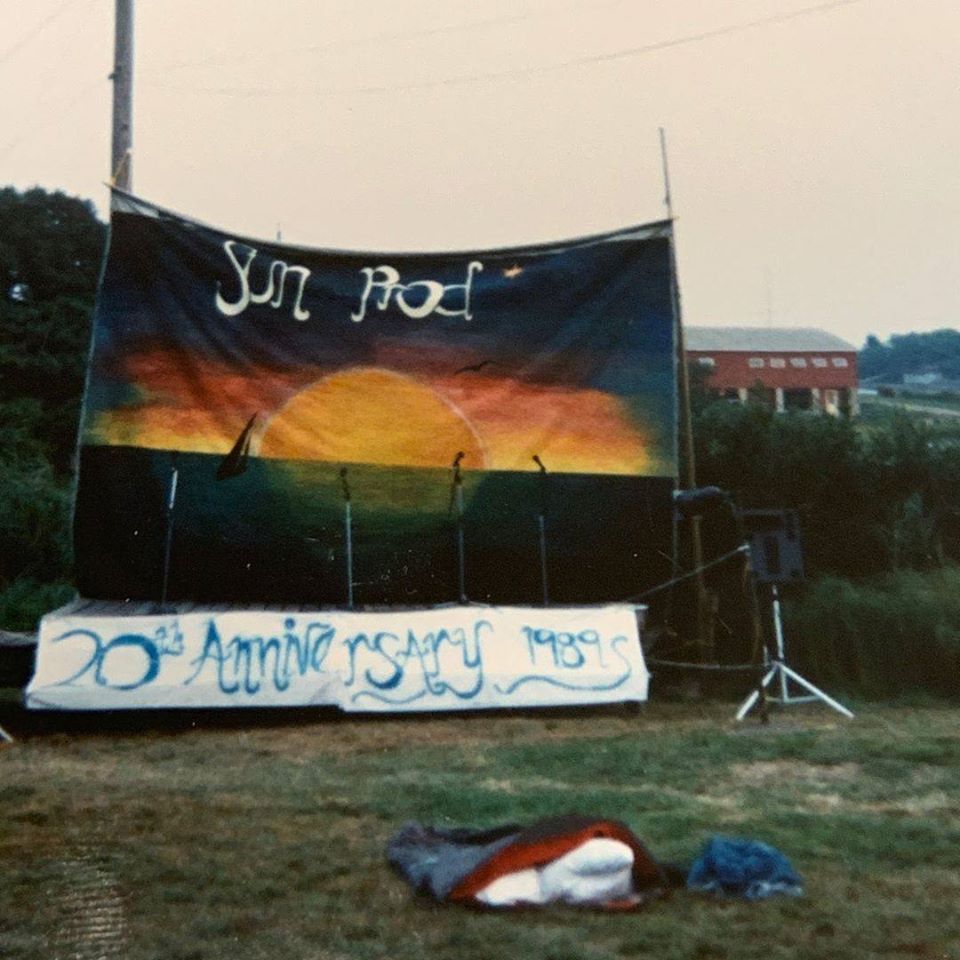 Anyone who has been to Camp Fuller in the past 50 years has probably heard of Sun Prod.  This event has been held and celebrated every summer at camp since 1970.  For those who may have missed the inaugural event, perhaps this story might shed some light on the original festival, how it got its name and how it has survived the test of time.

Although the first event at camp was in 1970, Sun Prod actually got its roots in 1969 from The Woodstock Festival held in upstate Bethel, New York.  As Bill Ressler recalls, there were a bunch of Fuller staff who were really into music and played on a regular basis with each other while at camp.  They would plan their days off together and would often go on “epic” trips to concerts in New York City, nearby Connecticut and Newport.  When they learned about the massive Woodstock music festival, they dreamed of attending.  Reality soon set in and they realized that going to this event just wasn’t going to happen.  But, the seed was planted and not forgotten.

The summer after Woodstock (1970), this same group of counselors had listened to the Woodstock music, seen the movie and had taught themselves a lot of the songs that those famous artists had performed.  They continued to play at council fires and other camp outings, but it just wasn’t enough…they had missed out on Woodstock and were determined to bring the spirit of that event back to camp.

Bill recalls: “We wanted this ‘Festival’ to be as big and impactful an event as any of the other major events at camp…right up there with Country Olympics, Blades and Arrows and even Pirates Day”.  The tone was set, the determination was there and all they had to do was convince the director, George Seiffert and the top staff.  “The looks on their faces were priceless as we described our vision: a stage, lights, sound system, and a musical talent show featuring staff and campers.  We wouldn’t start until dark, everyone brings their sleeping bags and we stay up all night”.  Sounds like Camp Fuller to us.  The hard sell, believe it or not, was Avie Avedesian.  The guys stuck with it and finally got the thumbs up.  Now what?

First, a name needed to be decided upon.  There was a simple song many of the staff had learned that year by Nils Lofgren and recorded by his band “Grin”.  The song, Everybody’s Missin’ The Sun was an uplifting sing-along about the virtues of getting up and out as opposed to sleeping in.    This song was adopted by the planners as the theme song and they decided to call the festival Sun Productions.  OK, now we have a name…what’s next?

Larry Schwartz remembers the big event from 1970 from a different perspective.  Larry, Haig Avedesian and a few other staff members were among those who worked the logistics for the festival.  At the time, there was no real stage large enough or in the right location to accommodate this undertaking.  Using the old green truck for a base and pulled into a tight spot between the dining hall and the old path over the marsh to Senior Hill, they built up the space to make it larger for the evening performances.  55 gallon drums, an old tent platform, along with some discarded drafting tables from the Arts and Craft building were added around the flatbed of the truck to create a stage that the organizers of Woodstock would have envied.  Budget? There was no budget!  This is Camp Fuller, home of the rock hammer…we’ll use whatever we’ve got and make it work.  Someone recalls the stage construction akin to an old-fashioned barn raising.  Anyone who could swing a hammer got involved and built the stage which could have easily landed in the Smithsonian.

So, now they had a stage… what about lighting and a sound system?  Larry also recalls donating some of his stage lights that he had built for his rock band when he was 13 years old.  This, along with some audio equipment which was loaned to camp by Steve and Jim Litwin’s family from their store in Providence…Sun Prod was close to launch.

What’s a music festival without the requisite T-shirts?  Need a logo, no problem.  With the help of Andy Holden, the Arts and Crafts Program Director and the creative talent of Fred Weiss, a logo was designed and a stencil made for mass production of the T-shirts.  Still working under the name “Sun Productions”, the first shirt was printed.  What do you mean the name doesn’t fit on the shirt?  How can that possibly be true?  Back to the drawing board to make it fit, “Sun Prod” with a smiley face, painted bright orange…it fit and the rest is history.  Now you know.

The evening’s entertainment was open to all.  Bill Ressler and Bob Geary performed their rendition of CSNY’s Suite Judy Blue Eyes.  Gordie Wallace, Andy Wilkes and a friend from Warwick played Key to the Highway.  David Weiss and Richard Silver, Dana Westberg and Josh Worby played a few songs.  Adding to the excitement were the camp wives, Alice Avedesian and Jeannie Andrews who did a song and dance number.  Even the kitchen staff performed something.  If you had the nerve to get on stage, you were welcomed.  How long you could remain on stage was up to you.

The evening went through the night with sing-alongs, a few skits (including the debut of Short Mort), stories and a lot of laughs and good times.  We are sure some of the older kids slept where they landed and breakfast the next day was “come if you can”.  Clean-up was a big chore and everyone languished in the memories of Sun Prod.  Little did anyone know that 50 years later, this event would continue to be a mainstay at Camp Fuller.

Thanks to all who had the vision and fortitude to pull this off.  Two generations after the fact are also thanking you.  Sun Prod 50?  Who would have ever thought?