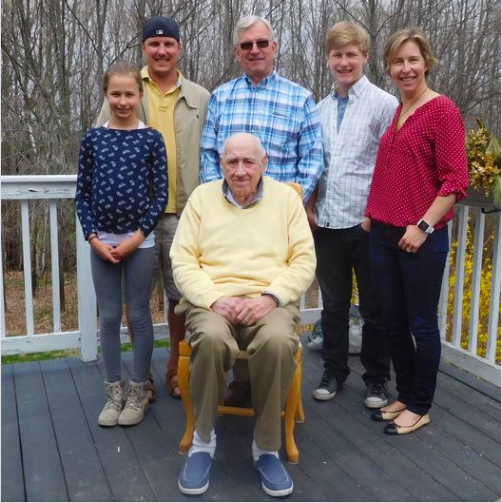 Home   > Stories >
Voices of Fuller
By Sophie Brandt, 2017 Sherman Camper of the Year

For four generations of Sundins, Camp Fuller has provided lifetimes of summer memories.  The first was my great-grandfather, Roger Sundin, Sr. who started attending Camp Fuller in 1935.

My great-grandfather, Roger Sundin, Sr. told me of his favorite memories when he was a kid and playing here at Camp Fuller and these experiences are just like mine, well kind of.  He tells me of great food his favorite being chicken patties (which are still amazing even to this day), platform tents, a lot of time in the water, swimming in the freezing lake, using sailboats, and that the arts n crafts were not the greatest.  He still thinks about these memories even to this day.

He was followed by my papa, Roger Sundin, Jr. and his brother, Fred Sundin who were at Fuller during the 50’s through 1960.  Roger, Jr. left Fuller in 1960 and went with Charlie Hanscomb to Camp Jewell.  When Roger and Fred were campers things were severely different.  My papa’s favorite activity at camp was baseball.  Back then Camp Fuller had a camp baseball team, in which they would travel from camp to camp playing against other teams.  He also remembers “marathon” swims where campers would swim 440 yards there and back to 440 Island (if you couldn’t tell it’s called 440 Island because its 440 yards away from camp).  They also had horseback riding, family day, and the Apaches.  Quahogs were also a prominent memory for him.  “We would go digging for quahogs and sell them at the carnival.”  The carnival is where each cabin has their own carnival stand and my papa’s cabin would dig up quahogs and sell them to the parents for money to donate to some kind of cause.  He was also part of the Apaches, an honor society similar to the Council we have now but much more intense.  He recalls having to jump over a 4-5 foot wall in order to become a part of the Apaches.  As you can tell when my papa was a camper things were very different.

With Camp Fuller accepting female campers in the late 1970’s, my papa could send his daughter (my mom), Kristin Sundin Brandt and her younger brother, my Uncle Bryan to camp.  Kristin was at Fuller beginning in 1981 and ended her tenure there as Sherman Division Leader in 1994.

My mom recalls when she started in 1981 they were in platform tents that had been previously occupied by boys (which they could tell from the writing on the canvas).  Of all the types of cabins she lived in at camp, the platforms were her favorite despite the occasional snack seeking skunk that would take a nice stroll through their tent in the middle of the night.  “I grew up at that camp”, Kristin stated.

Camp Fuller was her refuge.  Being bullied in middle school really took a toll on her self-esteem, camp was the place where she could be herself and not worry about being judged.  Her favorite activities at camp were riflery (which is no longer available), canoeing and library tree.  She ended her career in 1994 after being the Sherman DL.  Bryan spent thirteen years at Fuller from the age of 7 in 1985, leaving camp in 1998.  Along the way, he became a Skipper and ended up on the sailing staff when he was a counselor.  He went every year with his best friend Charlie and memories to last a lifetime.

Which brings us to today. In 2014, my mom returned to Camp Fuller to drop off me and my brother Anders for our first day at Fuller.  Anders favorite activities consist of windsurfing and mountain biking.  He states that camp is his “second home” where he can get a break from the real world and can just let go and relax.  He also said “camp has made me a more understanding person.”  He is planning to become a counselor so he can learn leadership skills and have amazing memories.

For me personally camp is my home away from home.  The council fires, new friends, divisionals, cabins, sailing, the mess hall, siesta, LD weekend, and much more.  They are all what make Camp Fuller my second home.  I too plan to become a counselor one day so that I can give other girls the amazing experience I am having.  That may be far in the future but I have my heart set on it.

While many things have changed since Roger Sundin, Sr. started the Fuller tradition – the camp has grown.  We’ve added modern activities like windsurfing and rock climbing, and women are now campers and counselors – much has remained the same.

Each of us has driven down the Camp Fuller Road, full of anticipation and excitement.  We have gone swimming in the waters of Point Judith Pond, and walked the trails to Indian Rock.  We’ve gathered around the council fire and sung camp songs.  And we have made good friends and great memories that will last a lifetime.