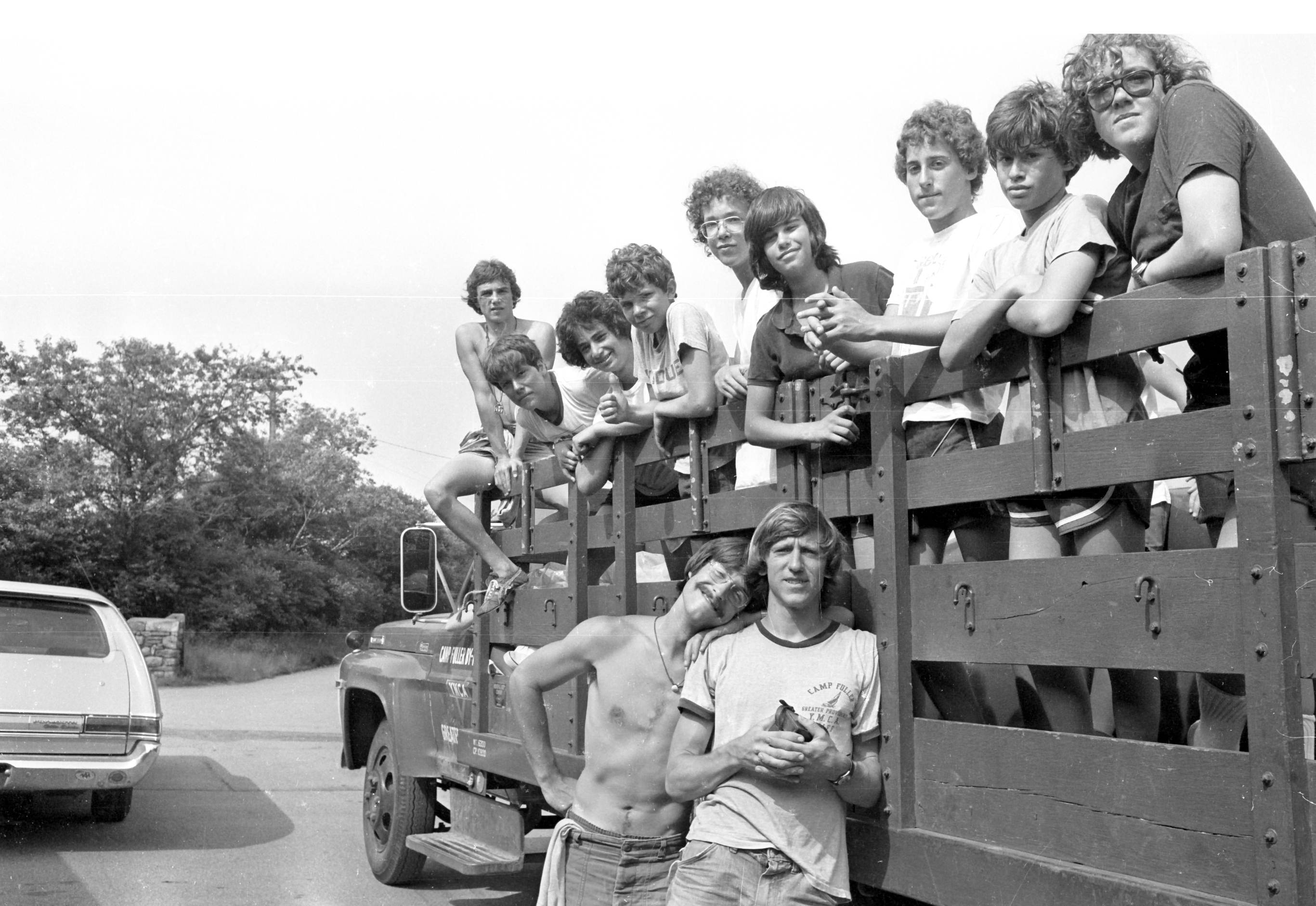 Among the many vehicles that have been a part of Camp Fuller’s fleet, the one that has a special place in many of our hearts was the green Camp Truck. The one I remember from my years at Fuller was a 1968 Ford F-600, stake bed truck. It was painted Holly Green, with dual rear wheels, a 330 V-8 engine, 4-speed manual transmission and a custom 12-foot stake bed, from Jannell Truck Body of Woonsocket, RI. It replaced a mid-1950’s International Harvester R Series truck with much the same layout.

The camp truck was truly a multi-purpose vehicle in every sense. It was used to haul away garbage to the dump and bring USDA Surplus food from the ACI back to camp. Most notably, it was used as camper transportation: Whether it was going to the Tanner-Collins reservation in Charlestown, Catholic services in Wakefield or to the Block Island Ferry terminal in Galilee, we endured and enjoyed our open-air rides. Just seeing the looks on peoples' faces in the ferry parking lot as this truck emptied some 40 plus campers, made any discomfort truly worthwhile.

It was also used to transport campers and canoes to the start and finish of the annual Pawcatuck River canoe trip which would start at Worden Pond in South Kingstown and end in Westerly. It was the preferred method of transportation to take large groups of counselors and CIT’s on their nights off. 55-gallon drums were placed onto the truck, filled with gasoline, driven to camp and rolled on 4x4’s down to the gas shack for use in the motorboats.

What could possibly go wrong? Going down Route 1 at 60 mph, standing up and screaming into the wind, anticipating the U-turns and hoping that the gates would hold in place and getting whipped in the face by tree branches on the camp road made it a memorable ride.

Steven Levy and Bill Parlett, both about sixteen at the time, recall having Avie take them to get their chauffeurs’ license at the Department of Motor Vehicles in Wakefield so they could be official truck drivers. It was a simple time and nothing about this seemed unusual.

Larry Schwartz recounts his own personal memories about the Green Truck here:

"My first memory of the Green Truck is from 1969. As a working camper (top staff waiter), I got to do the garbage runs (G runs). That may not sound like fun, but it was! Two guys would ride in the back and two guys (I was one) got to stand on the riding boards and hold on to the mirror support as we rode around camp to pick up the 55-gallon drums that were used as garbage cans.

I'm sure that wouldn’t be allowed today! What a blast! Bear (Dave Andrew) was the driver and we picked up drums at the Boat House, Senior Hill, two at the Mess Hall, two at the Ad Building (above and below), Sherman Division, Junior Division and the Infirmary. The riders would jump off, grab the drums and load them up to the guys on the truck. Then we would climb in the back and head to the dump (now called a landfill) just north of the URI campus.

It was always a fun ride on the Green Truck! At the dump, we would empty the drums and sweep the truck. Then it was off to Maine's Ice Cream in Wakefield for ice cream. A real treat! Then a fun ride back to camp.

In 1974, I was head of Maintenance, so I drove the Green Truck everywhere, including the G runs to the dump! I drove the camping trips to Tanner Collins Reservation. That year David Weiss was the Trip Master and with his clipboard like the promoter Bill Graham and his mother Elaine's organizational genes we took more kids for that camping experience than ever before. Avie was so proud of David! Unfortunately, I must admit that upon leaving Tanner one day I hit one of the stone gates. No one was happy about that except the Narragansetts who got to fix it.

In 1975, I was DLB (Division Leader Boss) of Junior Division and we took the entire division to many places outside of camp, including Matunuck Beach, Charleston for ice cream, and Beaver Tail. I'm sure that wouldn’t be allowed today either! The Green Truck brings back some great memories."

Besides a truck, camp also had one or two station wagons used for daily town runs, trips to the doctor or hospital and other camp errands. Two of them pictured here are a 1952 Plymouth Suburban (name is correct) and a 1964 Chevrolet Suburban.

A few more just for fun: