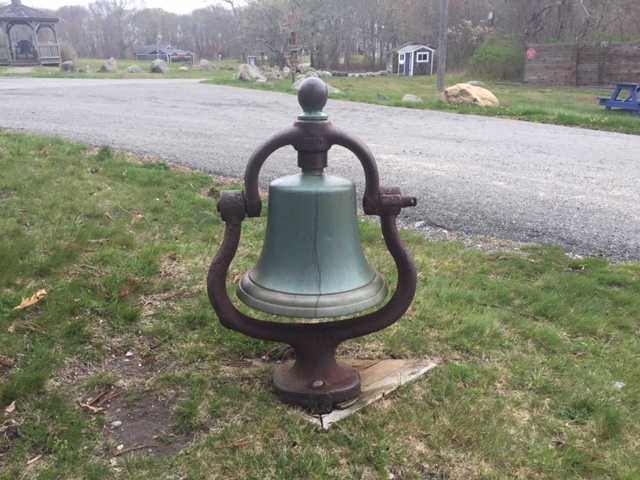 There is something about the sound of the Fuller Bell that evokes memories in all of us. Whether it was a call to Morning Line Up, any of the three meals, or a special camp event, the commanding clang got everyone to where they were supposed to be in a timely manner.  The bell was somewhat of a revered instrument at camp….something you walked by, but did not touch unless summoned to do so.

The old bell is somewhat of a mystery.  Cast out of bronze and mounted into an iron “yoke”, the bell is a solid reminder of its industrial past.  Nobody really knows for sure how it ended up at Camp Fuller, but legend has it that it came off an old locomotive from the New Haven Rail Road.  We can only imagine that it just sort of “fell off” a train coming down the camp road and landed on the roof of the dining hall and nobody noticed.

The number “357” is stamped into the top of the bell.  This number may have been inscribed at the foundry or it may have been stamped into the bronze before it was mounted onto the locomotive by railroad engineers.  Locomotive bells were often moved from one train to another and this was a way of keeping track of which bell went on which train.  It is not unusual to find an old locomotive bell with several different serial numbers stamped into it showing a sort of lineage.  Perhaps the bells outlived the iron horses which carried them.

The bell which now sits at ground level at the corner of the Ad Building used to be mounted on the roof of the dining hall.  A pull rope ran through a hole in the roof and into a small alcove inside the dining hall where it would be pulled to summon all to the next meal, council fire, or a camp emergency.  When the bell rang, Camp Fuller responded.

Summer camps throughout the country often have old bells which are used much the same as the Camp Fuller Bell is used.  Each one is revered and respected by the camp, its campers and staff.  The bell at a summer camp often embodies the great traditions of the camp and it is considered an honor to be asked to pull the rope.

YOU CAN HEAR THE OLD BELL AGAIN:

The old bell is used on a regular basis while camp is in session. It recently received a new "crib" built out of concrete and tropical hardwood to add more longevity to the bronze bell. We are sure to get another century of that familiar sound we all remember.

There is also a second bell which was brought to Camp Fuller to pay tribute to the camp's namesake, Frederic H. Fuller. The Fuller Bell was cast in Rhode Island by Mr. Fuller's foundry and is used for special occasions and events. A great addition to the deep history of Camp Fuller and an acknowledgement to the generosity of Frederic H. Fuller.