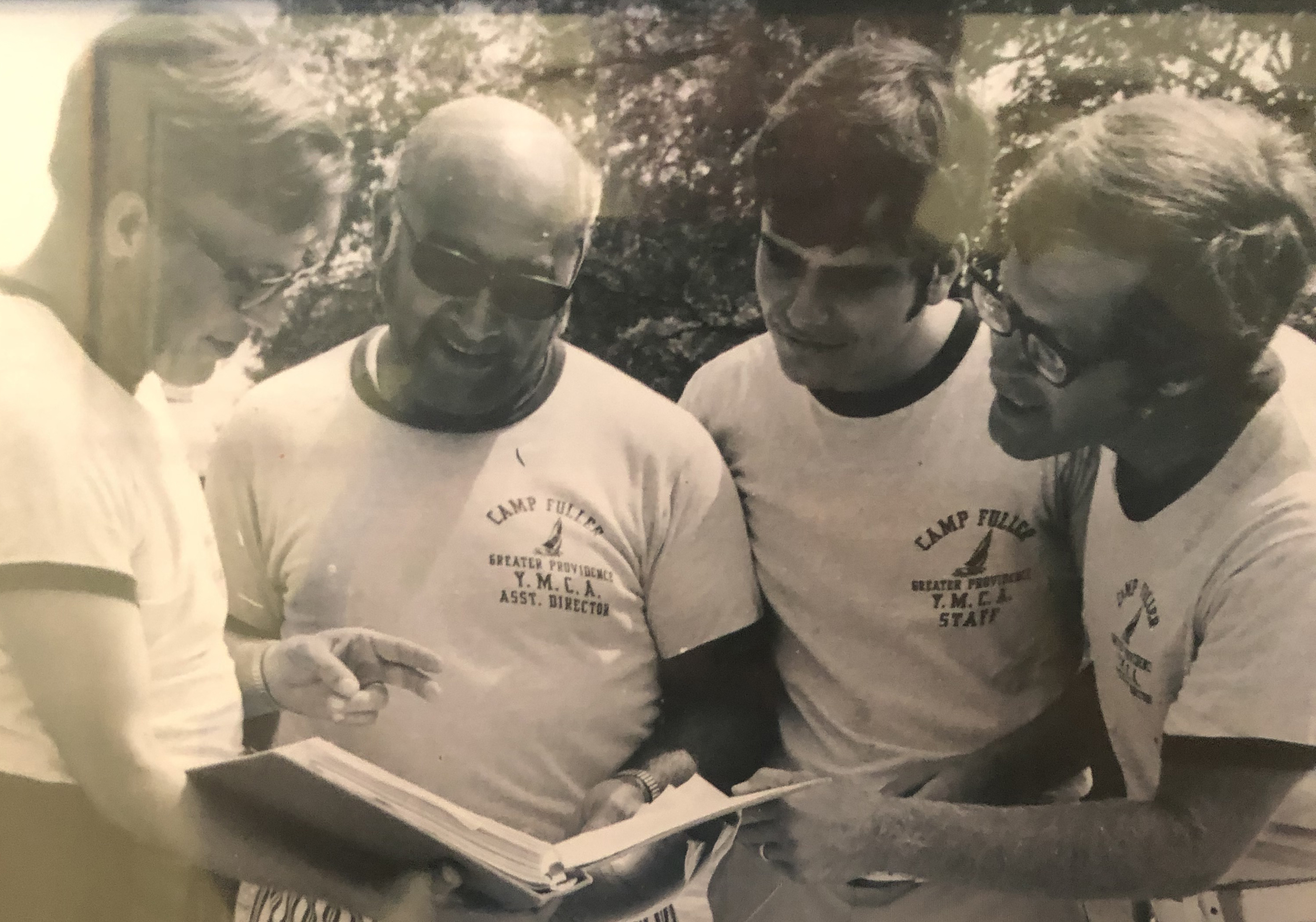 Where Are They Now: Paul D’Andrea

Camp Fuller has had great impact on hundreds of men and women who were fortunate enough to have spent time there.  Perhaps it was a one week session or several full summers on Salt Pond.  Either way, many look back on their time at camp as having had a great influence on the adults they became, the careers they pursued and the success they achieved later in life.

Knowing that so many were shaped by their Fuller experiences, we have asked that some share their stories on this website.  We invite all of you to read these stories as they are posted and perhaps say “I knew that person.  We went to Camp Fuller together”.

We also invite anyone who would like themselves or an old camp buddy to be featured in this section “Where Are They Now”  to get in touch with us.

It is with great pleasure that we share the story of Paul D’Andrea.

Catching- Up with Paul D'Andrea: AKA "PD"

I first came to camp as a camper in Junior Division.  Ken White led the division and my tent was fortunate to have a lot of interaction with him since my counselor was a novice international YMCA counselor from Peru.  Ken spent the time to ensure I had a great summer experience; made lasting friendships and understood the importance of "team"  in meeting any challenge.  From Junior Division, I returned to camp as a storekeeper under the tutelage of George Heymont.  I still remember "interviewing" for my first summer job at the downtown Y in Providence.  George asked me a few questions and then announced I had the job if I wanted it. The stipend was $100 for the summer. I felt so proud!  George gave me an appreciation for opera & Broadway show tunes which played every day in the camp store.  My appreciation has carried forth throughout my life.  I lived 5 years in Italy and attended several operas - outdoor productions in the summer in Verona and Viareggio which always recalled for me George playing opera in the office.  I was amazed at his speed on the adding machine and type-writer. Just unbelievable!  He set high standards for us, ensuring accounts were balanced every night.  On those nights we just could not seem to balance, George would come to the office and find our errors in just a few minutes.  He was a leader who never allowed us to fail.  I eventually became the summer Business Manager at camp thanks to the human and technical skills I learned from George.

I first met the Avedesian family my first year on staff in 1970.  We all became life-long dear friends- dear friends - to this day.  David introduced himself by proclaiming he had the top bunk in the Boathouse and I could have the bottom bunk.  From there, we became fast friends that carried into the winter months as well and we have never lost touch with one another; attending many major life events for each other.  A favorite story is my Skipper sailing practical during what I recall as a fierce storm on Salt Pond.  David, as proctor, and I were alone on a Javelin and suddenly David went overboard.   For what seemed like 20 minutes I could not find David.  The wind, sea chop, and rain hollowed as I searched for him frantically...yelling at the top of my lungs for him as I thought, how could I ever tell Avie and Alice that I had lost their oldest?  Eventually, David popped up from under the boat and announced I passed.  A lesson in perseverance and friendship.

I carried the values of hard work, loyalty, perseverance, and always do your very best that I learned at Fuller to my careers in the military, the hotel and resort business, and now as a university professor.  Avie was a sounding-board for me when I was considering whether or not I should accept a 4-year fully funded Army ROTC scholarship that I was awarded. A 4-year military commitment seemed like an eternity to this 18 year old.  Avie shared perspective with me and I accepted the award and entered the University of Michigan, Ann Arbor; a school that as an out-of-stater, would not have been affordable otherwise.  A 4-year commitment translated to a 20-year career in what seemed like the blink of an eye. Assignments in Korea, Japan, Italy, Boston, and The Pentagon all tested me in many ways and so often I returned to my Fuller roots for reference.  I was also fortunate to attend graduate school for business and law school under fully-funded military programs. Ultimately, as a Lieutenant Colonel, I served on the staff of the Joint Chiefs of Staff, General Colin Powell.  I specialized in national security law and coordinated General Powell's preparation and attendance to White House meetings as a member of the Principals Committee  to the National Security Council, chaired by the President.

I met my wife, Judy Ann, when I operated the Hale Koa Hotel, an Armed Forces Recreation Center on Waikiki Beach in Honolulu. It is a beautiful hotel for the military that rivals any of the commercial hotels on Waikiki with room rates adjusted based on the military member's rank.   Judy Ann was appointed Assistant Secretary of the Army by President Reagan.  They knew each other from when she was the county manager in Contra Costa county, CA while he was Governor.  At the time, she was the most senior woman in The Pentagon and traveled the world representing our country.  She came to the Hale Koa to view our plans to add another 400 rooms.  There was instant chemistry and I eventually got an assignment back in Washington and we married 4 years later.  Judy Ann continued in her role through the Bush Presidency and for more than a year in the Clinton Presidency.  When I could, I travelled the world visiting our allies with Judy Ann as "the spouse" often on dedicated aircraft.  It was a different world and Judy Ann was a force of nature as she oversaw the Army and later the AirForce.

Upon retirement for Judy Ann and my military retirement, we went to Sacramento.  We knew Senator Pete Wilson from our time in Washington, and when he became Governor of CA, Judy Ann ran his Trade and Commerce Agency and I accepted a Chief of Staff position in the CA Assembly and Chief Consultant for the Select Committee on Military Base Conversion.  Lots of military bases were closing in CA and turned back to the state. We produced the definitive legislation to guide that process and turn these bases into economic engines.  We both had important jobs but did not enjoy the politics so after a year or so we came to Tucson, AZ where Judy Ann was raised.

I had loved the hotel and resorts business and although I was prepared to practice law in AZ, I accepted a senior position at a beautiful resort in Tucson in 1998.  Every day was a joy and Judy Ann retired to enjoy the good life.  I progressed in my responsibilities and became a Vice President for the hotel and resort management company; overseeing the western states and a dozen properties we operated there.  After more than 20 years in this business, I am semi-retired handling a few special projects and am teaching business and hospitality law at Northern AZ University.

It has been a busy life...so far.  Tragedy struck in 2019 with the passing of my beloved Judy Ann after almost 30 years of marriage.  Not a day passes when she is not in my thoughts.  But "keeping busy" and spending time with friends and family has helped.  My Fuller family is a big part of the joy I have found.  Very soon after Judy Ann's passing, David Avedesian insisted I come to MD and spend time with him and his wife Mary Beth.  This was the exact tonic I needed then and reflects the friendship and love I have for David and my camp family.

I often reflect to myself now on my Fuller days...great times that helped shape me to be the man I am today.  I now know the Fuller experience was the bed-rock of my life in so many ways and I am so thankful for all it offered me.